Why being around complainers sets you up for a downfall

We all have complainers in our lives. It’s a fact.

And if you’re anything like me, just the sound of the word “complainer” makes you sigh.

And roll your eyes up.

You might even find yourself picturing one or more of them. The real complainer(s) you have in your life.

Those you interact with day in and day out.

And maybe that picture in your mind feels so real that makes you want to run away.

Or hide in a safe place.

So you can avoid them.

The thing is, we all have someone like that in our circles. It can be at work, at home, in our extended family, among our friends or acquaintances.

We all know someone who complains all the time. And there’s no way we can make them stop. Or change. No matter what we say or do.

Just by being around them.

It doesn’t mean they’re necessarily bad people. This is not about being a good or a bad person. I’m not making any judgment.

And it might well be the case that some of the most generous people in your circles are complainers.

Still, you wish you could fly miles away when they’re around.

I have few of those in my circles too. They’re generous and outgoing. And would do anything to help you. Still. Chances are that, after spending few minutes with them, you end up drained and exhausted. If you don’t know how to deal with them.

This is how Guy Winch describes complainers on Psychology Today

“Optimists see: A glass half full.

Pessimists see: A glass half empty.

Chronic complainers see: A glass that is slightly chipped holding water that isn’t cold enough, probably because it’s tap water even though I asked for bottled, and wait, there’s a smudge on the rim, too, which means the glass wasn’t cleaned properly and now I’ll probably end up with some kind of virus. Why do these things always happen to me?”

And that’s really their attitude throughout life.

That’s how they portray themselves.

That’s how they come across.

Here’s the thing indeed. Complainers don’t see themselves as complainers.

Are they in denial? Maybe.

Often they also complain about how much other people complain(!)

Psst, hey – you may want to do a quick self-check here.

To be sure you’re not one of them. A complainer.

You don’t want be the one people try to avoid just because. Do you?

A mirror neuron is a neuron that reacts (the technical terms is fires) both when a given action is performed and when that same action is only observed.

The mirror neuron system (MNS) is defined in the Indian Journal of Psychiatry as “a group of specialised neurons that “mirrors” the actions and behaviour of others”.

What does that mean?

Clearly the MNS plays a role in our evolution and development as we learn by watching and imitating others. It makes it easier for us to learn new skills. And learn them faster.

But this also means that we learn and pick up faster bad habits too because the MNS doesn’t distinguish whether the behaviour that’s being performed is good or bad. The MNS fires automatically and mirrors that behaviour or action.

That’s what happens when we’re around complainers. Our MNS fires and “learns” that behaviour.

And wiring your brain towards that type of behaviour translates in a negative impact on your health and well-being in general. But I’m not going to go in the depth of this right now – not the purpose of this article.

What can you do then?

If you’re a complainer, you need to stop complaining.

As simple as that.

If you’re not a complainer but have complainers in your environment, then it’s a bit more complex.

Are you going to wrap yourself in cotton wool?

Blocking complainers out of your life is not (always) the solution.

And sometimes it’s not even possible.

Think about those (the complainers) who are family members or colleagues – your boss maybe?

Moreover, even if you manage to cut some of them out of your life, you will never be able to cut all of them.

And even if you did manage to cut all of them out of your life, there would always be some random complainer popping up out of the blue that would disrupt your not-anymore-complainers-free-life.

What you rather want to do is putting in place strategies that allow you to effectively deal with your complainers.

And that’s different to dealing with complainers in your family, in your circle of friends or acquaintances.

To help you with that, I’m sharing here four of my most effective strategies I use when dealing with complainers:

1. First of all change the spotlight from

“how can I manage and contain them?” or “how can I help them solve their issue?”

Focus on you. Not them – the complainers.

They are making their own choices.

And you should make yours based on you. Not them. Or their attitude.

2. Decrease the time you spend around complainers.

Make a conscious decision of not spending, for example, more than x amount of time with them.

Don’t try to “help” them. Don’t give them solutions.

They’re not interested in any of those and will only find reasons why your solution won’t work in their case. Persisting on that line of approach – e.g. offering solutions – would make you a Don Quixotte de La Mancha.

4. Ensure that after you deal with them you take some time to replenish your own energy. Including emotionally. Music is the fastest way to do that. Sooo, put your favourite music on and enjoy it.

Implement at least one of the above strategies next time you deal with a complainer and let me know how it goes at marina@marinabruni.com I look forward to hearing from you.

Get out of your zombie trance!
Use these tips. Now

We will never spam you. 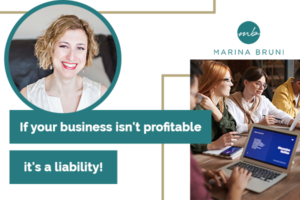 For a limited time, we’re making our Masterclass available for free!!

Click the button below to learn more about how you can properly secure your business while leveraging your legal foundations to elevate your brand status, build trust, and become an authority with your clients, prospects & partners.

I’d Rather Be Profitable!